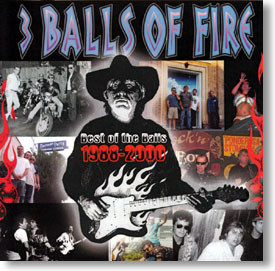 A super cool collection of recordings by the men with the burning guitars from their early years and a few bonus tracks from their later years. "Crazy-ass guitar-driven heaven!" - MusicMan Reviews. Burnin' Mike Vernon's 3 Balls of Fire, "the men with the burning guitars", have led the way for instrumental guitar bands in Austin since 1987. The popular trio from the Lone Star State perform original, high octane, road-tested, surf-drenched Texas twang. They dip into in surf guitar, hotrod music, lounge favorites, and cowboy exotica from the Sixties, and their bluesy twang is incendiary. "No one sounds like 3 Balls of Fire and 3 Balls of Fire sound like no one else!" Reverb Central.

1.   The Men With The Burning Guitars

14. The Men With The Burning Guitars (reprise)