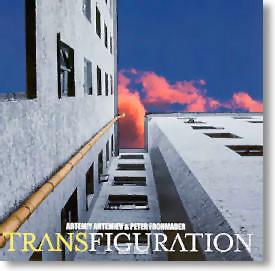 Transfiguration is a collaboration that makes magic! Part I starts with some simple loops and samples; repetitive but it sets up the rhythm for this track and underpins it while Peter Frohmader's guitar does its own loosely cyclical part. Part V, the longest track on the album at nearly thirty minutes, is also the most cosmic. This is an album of many moods, at times forceful but also laid back, it ranges from avant garde to commercial electronica, but it is always listenable and at times quite stunning in its range of sounds and their musical manipulation. It's difficult to allot credit to either musician, their individual styles have merged seamlessly here. Another winner for Electroshock.

Peter Frohmader's Nekropolis - Molokko plus (04:03)
Just a bit of psychedelic weirdness. Don't ask me where the sharks are coming from. An excerpt of a version of "Molokko plus" that will be part of a DVD project by musician and painter Peter Frohmader. Nekropolis: Peter Frohmader, Helmuth Graf, Udo Gerhards