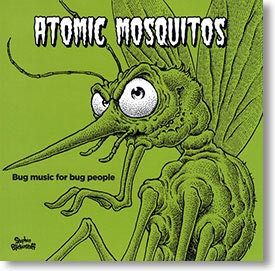 Purveyors of instrumental surf sounds, Atomic Mosquitos formed in 1983 then broke up in 1987 because the members of the band wanted to pursue other musical avenues. But after all these years, they realized how much they missed playing instrumental rock, so they decided to get back together and give it another shot. Atomic Mosquitos certainly add a boost of excitement to the instro scene! “Bug Music For Bug People” builds on the basic sound from “Meltdown (including some Theremin) but it goes so much further with new surprises on nearly every track. "Half Asteroid" swings into a middle eastern sound, "Pluto's Revenge" brings a level of savagery to a group that was never tame to begin with, and yes, they cover Jaan Pehchan Ho! This CD is perhaps mellower than the previous.