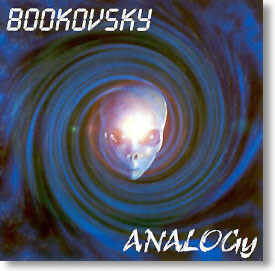 Bookovsky (Michael Bukowski), with his new CD, presents a great example of classical ambient electronic music, similar to the early Tangerine Dream compositions. Other influences include Klaus Schulze, Robert Schroeder, Vangelis, Adiemus and Paul Haslinger. Analogy is a fine example of the so called "Berlin School" - sequenced trance music, full of intriguing sounds and bleeps. Ideal for relaxation, this CD will take you into another dimension of space and time. Bookovsky's sound has been refined since 1994 when his first album was produced. The exhaustive polish put on this new release is more than evident.