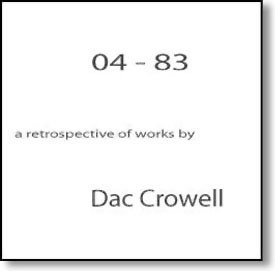 Dac Crowell - A Retrospective of Works

DAC Crowell studied under Stockhausen and absorbed other influences too. From the dark minimal ambience of 1983's "Rising Invocations", via the ecstatic eastern crescendos of "Ahnomia" (1989, as part of Nashville duo LVXUS), to the deep immersion of 2000's "Untitled" and 2004's pulsating, other-worldly "November Light", this sixth release on Suilven Records is a snapshot of the evolution of DAC Crowell's music from 1983 to the present day. As such, it constitutes a rare and valuable glimpse into some lesser-known history of electroacoustic/minimal/ambient work of the last twenty years. It's quite interesting to see where it's all led...and to ponder where it might go.