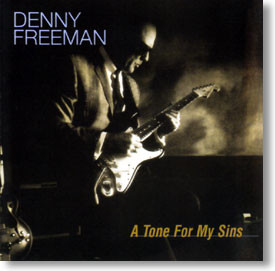 Denny Freeman - A Tone For My Sins

Denny Freeman was a mainstay of the Austin TX music scene in the 1970's and 1980's, and as such, had a major influence on Stevie Ray and Jimmie Vaughan. In fact, Denny and Stevie played together in Paul Ray's band The Cobras. Eleven of the twelve tracks on this recording are penned by Freeman and he achieves diversity through a variety of blues styles, as well a, a variety of soundscapes. The blues offered here varies from straight-ahead blues to blues-rock to a little country-blues and on the final track, a leaning towards jazz-blues. On a few tracks Freeman overdubs his own Hammond organ or piano, but these never compete with the guitar as the main instrument.