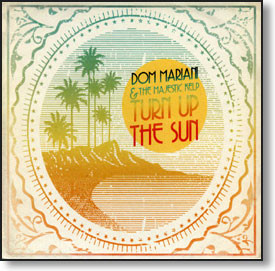 Dom Mariani & The Majestic Kelp - Turn Up The Sun

After a 7 year wait, Dom Mariani and The Majestic Kelp are back with the release of their long-anticipated third album, "Turn Up The Sun". The album's 13 tracks of layered and irresistible melodies evoke summer days and balmy oceanic nights with a knowing nod to movie soundtrack maestro, Ennio Morricone, where the inspired instrumentation and psychedelic leanings were hinted at on the Kelp's previous albums. This disc opens with a classic, surf instrumental style neatly followed by some sunshine, pop-vocal harmonies. "Turn Up The Sun" sees Dom using his voice to great effect, as evidenced on these tracks and at the end of the epic soundtrack themed "Silver Sea".

8.   The Ghost of Boobalooba Beach