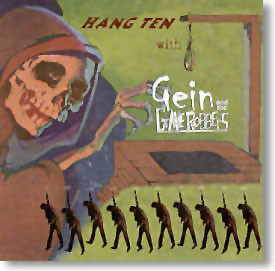 Gein and the Graverobbers have established themselves as Boston's premiere instrumental Horror-Surf quartet. What is "Horror-Surf?" Its Fender guitars saturated in reverb, shredding through high-energy songs brimming with horror and oozing atmosphere. With Gein, Kemper, and DeSalvo decked out in torn black suits, ties and zombie make-up -- and Myra in her mini skirt and go-go boots -- the band looks like a cross between characters from a Tarantino film and something out of "Night of The Living Dead." When these go-go ghouls mix the traditional surf sounds of artists like Dick Dale with the eeriness of the Cramps, they take their audience into a world of B-movie horror.