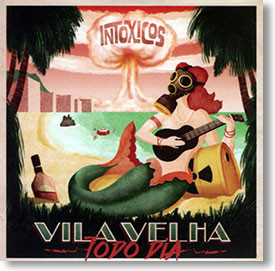 An excellent Brazilian surf combo featuring eight outstanding songs, released by the always excellent Reverb Brasil record label. Intóxicos have been playing live since 2013 and have finally released their first CD "Vila Velha Todo Dia". It's got a wide range of themes and ideas with solid guitar work throughout. I particularly got a kick out of their attempt to make Intoxica more intoxicated in their self-titled track "Intóxicos". The band has played in the Mineiro Surf Championship in Belo Horizont, which is a surf music festival with bands from several Brazilian states. For a ride on a Brazilian long board, ya probably will have to look hard to find a better time. As a side note, they've also got a pretty fun pixel art video poking fun at the old California video games.