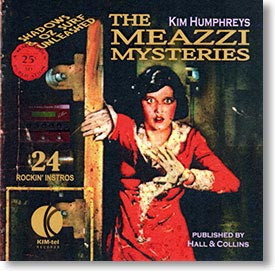 “The Meazzi Mysteries” album has put Kim on the front cover of the world's longest running instrumental magazine, the UK published New Gandy Dancer. This recording was inspired by and uses the Hall and Collins Signature Echo substantially through the album, giving it a unique flavor. Kim, like Martin Cilia, is also a well known and respected Australian guitarist. Both appeared regularly at the annual Australian "Shadoz" event before it was discontinued. Kim's Shadows interpretations are anything but conventional, so it's quite interesting to see him so soundly endorsing the H&C which will certainly get use well beyond the normal Hank echos. The album also contains original material and a bunch of long forgotten Aussie, surf instrumentals.