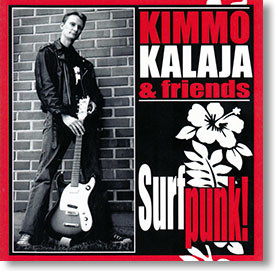 "Surf Punk" features a bunch of tightly-composed instrumental pieces in which the tube amplifiers get the ride right along with the beat. Kimmo's wavy wires rise on a strong surface of the friends' support amidst the surfer and punk minglings. The songs are (on average) a little over two minutes and the guitar rings briskly and the most significant work of the rhythm section creates suitable glory. In addition to Kimmo, there are eight players on the album, including three familiar faces from the Ramopunk circuits and the rest from the surf crew. "I've got a lot of great musicians on the disk..." -Kimmo Kalaja. Surf with Punk overtones - it's a natural.