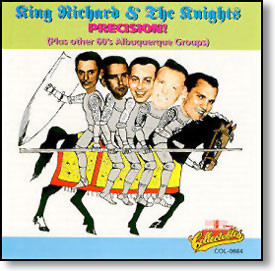 This Albuquerque, NM outfit, known as The Knights, had outlasted most of its contemporaries (albeit with a 30 year hiatus in the middle), mostly by virtue of the quality of their singles, which turned them into local stars. King Richard and the Knights started out in 1961 as a Ventures-type instrumental outfit, playing surf instrumentals and throwing in the occasional Chuck Berry-authored vocal number for variety. By 1964, they'd evolved sufficiently to rate a recording contract with Red Feather, who scored with the Knights' first release, "Precision!". The CD at hand is a great retrospective of this combo's early work.