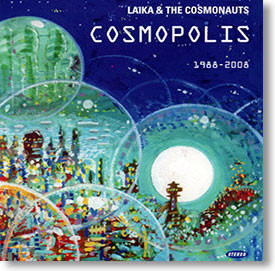 While 20 years is a nice round number on which to throw in the towel, the Finnish surf and spaghetti Western-influenced Laika & The Cosmonauts don't take the easy way out on this final bow. Running a bit-bursting 76 minutes, the cuts are drawn predominantly from six (five studio, one live) albums, most of which are out of print as of this set's appearance in 2008. Fans will be thrilled to find a few difficult to find tracks that open the disc. What makes “Cosmopolis” such a listenable collection, though, is the variety of styles Laika span, all unified by a common cinematic thread. The sound is never cluttered, with guitars and keyboards weaving around each other while leaving room for the music to breathe.