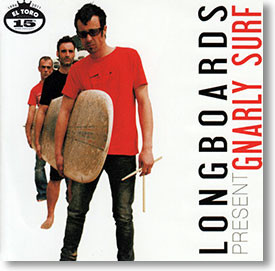 The third album, "Gnarly Surf", from Europe's #1 Surf band! The Longboards deliver a feast of solid Surf instrumentals, recorded on vintage equipment to recreate the atmosphere of the original Surf era. The band has drawn comparisons with Los Straitjackets, Dick Dale and even Link Wray, and there's plenty of original material showing that the Longboards are no pale imitations of what has gone before. With this album, the band proves that there's enough originality to create something new and fresh, with each and every one of the self-penned tracks, whilst drawing inspiration from the Surf Guitar greats.