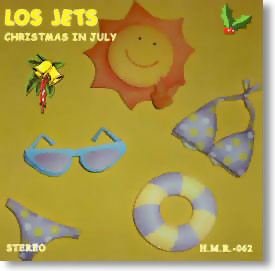 Thanks to Alan Taylor, co-editor of the British magazine "Pipeline", who (at Trader Vic's Restaurant in London) asked Los Jets why they never recorded a Christmas album. The band did not really know why, but felt that recording a Christmas album to sell in December (meaning you have to record it in July), would feel very strange to do while wearing sandals and swim suits (during a recording of "Silent Night" for example). Yet, they did the recording during the summer of 2008 with sandals, many beers, and a swimming pool. The album was started in July and finished in September, as the temperature remained around 40ºC, outside the studio.