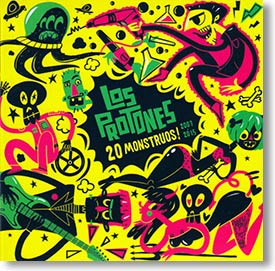 While Los Protones are not trying to replicate that sound of surf rock, psychedelic music and cumbia (common in Peru), there's one thing that they have in common: attention to tone! Over three studio albums, they have developed a unique instro style. The guitars have the perfect timbre to accentuate the mood they're going for in each song, and they're often joined by instruments less heard in surf. "20 Monstruos! 2007​-​2015" includes studio cuts, live cuts, unreleased material and demos.