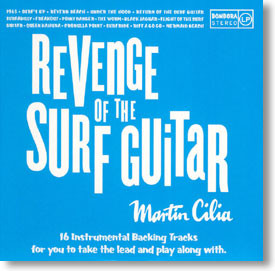 Guitar karaoke... instrumental tracks for you to take the lead and play along with. Get out that electric guitar, plug in the amp and turn up the volume. Here's your chance to take lead guitar and play along with legendary Atlantics guitarist Martin Cilia on these 16 backing tracks. A great way to improve your playing skills. The guitars and amps used on this recording were a 1963 Fender Jaguar, a 1963 Fender Stratocaster, a 1963 Fender Vibroverb and a 1963 Fender Outboard Reverb Tank. All of these instruments just happen to be from 1963. "Revenge of The Surf Guitar" is Martin's tribute to the sensational sounds of the early sixties surf guitar. So join in the band.

5.   Return of The Surf Guitar

11. Flight of The Surf Guitar

How to play Big Swell (sort of) [The Atlantics] by Martin Cilia (03:14)
The song was written by Martin and originally recorded in 1999 by The Atlantics. Big Swell is from the album Flight of the Surf Guitar. More info on http://www.theatlantics.com/