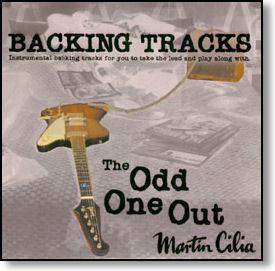 Martin Cilia - The Odd One Out Backing Tracks

Martin Cilia is Australia's premier surf rock guitarist and also a member of legendary Australian surf band, The Atlantics. These Backing Tracks are for guitarists to play along with. "The Odd One Out" album is a diverse collection of songs and styles with plenty of variety from soaring bluesy rock to acoustic picking. It provides a good healthy dose of guitar playing. This is the second release Martin Cilia has put together of backtracks from an album for the express purpose of providing a venue for guitarists to play lead with the band. I like this concept - sort of a modern version of the Play Guitar With The Ventures series that was so important during the early to mid sixties." -Phil Dirt.