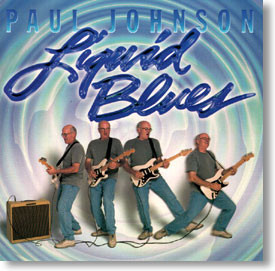 This recording is an eclectic mix of electric rock-instrumentals recorded in-studio; Paul plays all the guitars, backed by a crew of ace musicians. Includes several PJ tunes written for this project! With "Liquid Blues", Paul Johnson defies musical categorization by blending every popular genre into one instro gem after another. It's a platter of instrumental delights with the pure, crystal clear sound of the 60s Fender guitar. Like a good wine - as he gets older he gets better. "Liquid Blues" finds him at the peak of his powers. Blasting off with a melodic/rhythmic surf classic, he ricochets effortlessly into country pickin', a hot-blooded tango, and then some finger-poppin' jive.