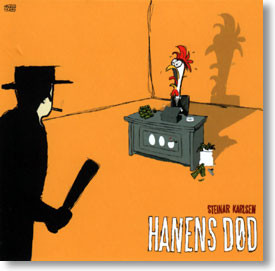 Norwegian guitar hero Steinar Karlsen strikes back hard and fast with this release. "Hanens Død" translates roughly to English as "The Rooster Is Dead". This CD is a major step forward for the art of instrumental rock and surf-rock guitar. One could cite greats like Dick Dale, Sweden's Kenny Håkansson and others from around the world, yet the music is so original and authentic you have to give Steinar credit in his own right. Steinar's own guitar prowess does right by those greats, yet he also taps into the guitar noir genre and some of "Hanens Død" sounds like it was lifted from some Scandinavian police / spy-fi series. It's serious instro rock with a fine studio sound.