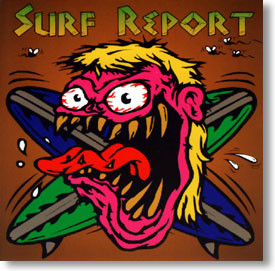 Formed in 1994, Surf Report reigned the Southern California surf music scene for ten years. During that time they released four full length CD's, toured the west coast and southwest United States and were billed with such greats as Link Wray, Dick Dale and Los Straightjackets to name a few. This CD is a few steps towards the hard driven edge of instrumental surf rock. It is a collection of songs that are excellent for cruising to, and features a great blend of instrumental surf with the right amount of punk to make it kick ass. Led by guitarist Ruhar, and aptly supported by double-picking prince of the surf guitar (yes, Dick was the King) Rick, Surf Report made immediate strides.

Surf Report - The Trooper (Iron Maiden Surf Cover) (02:49)
Rickshaw Records: http://www.rickshawrecords.com/inf-order.htm iTunes: https://itunes.apple.com/us/album/inferno/id78610627 CD Baby: http://www.cdbaby.com/cd/surfreport4 From '' Inferno '' Label: Rickshaw Released: 1996 Tracklist 01. Surfonica 02. Tsunami Rex 03. WristRocket 04. The Flash (Not A Song) 05. CMB 06. Freakaholic II (Sex Crimes) 07. Persuasion Stick 08. Green Horizons 09. Barnburner 10. Crowbar 11. The Trooper ------------------------ The Trooper" is a song written by Iron Maiden bass player Steve Harris. It is Iron Maiden's ninth single, and the second from their 1983 album Piece of Mind. The single was released on June 20, 1983. The song is about the Battle of Balaclava in 1854 during the Crimean War, and is at least partially based upon Alfred Lord Tennyson's poem "The Charge of the Light Brigade", taking the viewpoint of one of the slain troopers, who, in the cover art, is perceived as a bald Eddie with his lobotomy enhancements. Many Iron Maiden songs are based on books or films; this seems to be a running theme in the band's work, especially songs written by Steve Harris. To this day, it is considered one of the best heavy metal songs ever recorded, and often when performed live Bruce Dickinson wears a replica army jacket and holds an enormous Union Flag. Sometimes, before playing the song live, Bruce Dickinson will read parts of the Tennyson's poem as an introduction. The poem was later referenced by Iron Maiden again in the song "Paschendale" from their 2003 album Dance of Death. This song was also one of only a few songs to get much radio airplay and to be a commercial hit in the US, thus peaking at # 28 on the US Mainstream Rock charts. This song, along with "Run to the Hills", was omitted from the 2010 leg of The Final Frontier World Tour set list, however it was placed back on the set list for the 2011 leg of the tour. The main song rhythm is very suggestive of horses galloping, to mirror the lyrical theme of the Charge of the Light Brigade. What is also interesting is the dual lead fill between verses, this has the two guitarists, Dave Murray and Adrian Smith, later replaced by Janick Gers, playing a diatonically harmonized lead fill, this gives the filler more depth. Since Smith's return in the band, the three guitarists play in 3-part harmony. The first solo is performed by Adrian Smith and by Janick Gers live from 1990 to 1999. Since 1999, they perform it together in harmony. The second one is played by Dave Murray and it also seems to have changed over the years. The song's famous riff features similarities to an earlier Iron Maiden song "Purgatory" from the Killers album. Cover versions Sentenced recorded this song on The Trooper (EP) in 1994. The acoustic Iron Maiden project Maiden uniteD recorded this song on Mind the Acoustic Pieces in 2010. Nightwish used the intro of the song to end Wishmaster in the End of an Era concert. Blind Justice recorded a cover of this song on their In Equilibrium EP in 1994, featuring violin and saxophone. Vital Remains covered this song on their 1998 tribute album Call To Irons: A Tribute To Iron Maiden. The Iron Maidens recorded a cover version of the song on their 2006 self-titled debut album. Their 2007 CD/DVD release Route 666 features Motörhead guitarist Phil Campbell joining the band on a live version of the song. The Iron Maidens also released a dance remix of the song on their 2008 EP The Root of All Evil. An all-star cover of the song is in Numbers from the Beast, featuring Lemmy on vocals, Phil Campbell and Rocky George on guitars, Chuck Wright on bass, and Chris Slade on drums. Apart from differences in guitar solos and vocal patterns, this version follows Harris' original composition. German heavy metal band Rage have also covered the song on the tribute album A Tribute to the Beast. A cover of the song by Japanese band Onmyo-Za can also be heard as a Japanese bonus track on the same album. A version of the song is available by indie band Steaming Toolie. The song was covered in 2008 by Coheed and Cambria on the tribute CD Maiden Heaven: A Tribute to Iron Maiden released by Kerrang! magazine, as well as during their Neverender tour. They are known to occasionally cover it at live shows. Iced Earth often uses the intro riff of the song to finish their live performance of their song "Violate". Swedish band Hellsongs recorded a folk-styled version of the track on their 2008 album Hymns in the Key of 666. Thumper recorded a version of the song on the compilation Metalliska. Highland Glory covered the song on their 2005 album Forever Endeavour. The Protomen are known to occasionally cover it at live shows. Radio Cult released a cover of the song on their album "Grooves From The Grave" in 2008. Crywolf have covered the song in their first live performance.