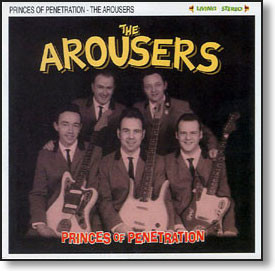 The Arousers - Princes of Penetration

A superb album from what has become a leading surf combo! They blast out some incredible thunderous surf-guitar instrumentals, interspersed with early 60's style vocal Rock 'n' Roll! 'Princes Of Penetration' showcases some fabulous original Arousers material alongside carefully chosen covers from the late 50's and early 60's. The Arousers have played at the Las Vegas Grind alongside their heroes The Trashmen. Mixing savage Instrumentals with frantic early sixties style vocal Rock 'n' Roll, they really do show a Trashmens influence. They have the look - They have the sound - Now, you need this CD!

The Arousers ( Margaya ) (02:46)
the bands version of this classic surf track