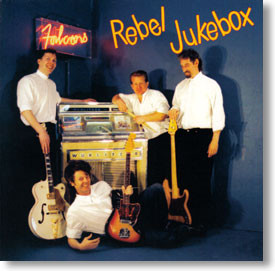 This CD was originally released in 2001 with liner notes by The Ventures. It has been re-mixed and mastered in analogue to celebrate The Falcons' 20th anniversary. "Rebel Jukebox" has The Falcons distilling its pre-Beatles era instrumental rock into a smooth presentation. Occasionally, as on "From Sea To Ska", The Falcons go beyond its self-imposed boundary, and in "Half Nelson", for instance, the members step out a little bit too. In this case, drummer Andre DesLauriers sounds like he's paying tribute to Sandy Nelson. "Every Pipeline reader should give The Falcons a listen and, take it from both Dave and myself, very few will be disappointed." Alan Taylor, Pipeline.

14. Pictures of The Floating World