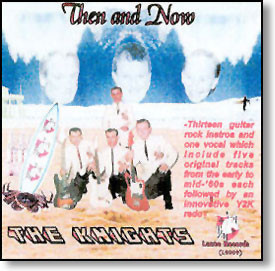 The Knights - Then And Now

The Knights (A.K.A. King Richard and The Knights) were a well-known, New Mexico guitar instrumental and frat-rock vocal band in the Southwest U.S.A. during the early to mid '60s. Two original members (Dick Stewart - lead guitar, Gary Snow - bass) reformed the group in 1998 with a new drummer, Steve Hudgins, and have since made a big impression musically throughout the Internet with a number of very moving, innovative instrumental melodies set in the early '60s traditional guitar rock style. Some of these modern tracks are updates of their '60s releases, which is really what this album is all about. Recommended to instro fans.