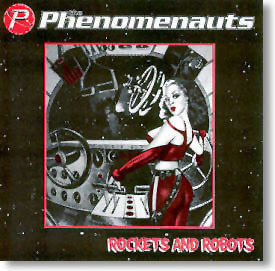 The Phenomenauts - Rockets And Robots

The Phenomenauts are Sci-fi Rocket-Roll masters from the future! Imagine if the Stray Cats, the Ventures, the Kinks and Devo were galactic pioneers. Hailing from outer space, they combine the sounds of pop, psychobilly and rock-n-roll for an all out adventure! This CD was originally self-released by The Phenomenauts on their very own Arlington Lab Recordings, but has been re-mixed and re-mastered, and think this new version rocks ten thousand light years better than the old one. Spacesuits, fog, flashing lights and toilet paper - The Phenomenauts have it all. This record is an experiment to take the Phenomenauts rock show and translate it to your mind!

The Phenomenauts - Infinite Frontier (04:44)
Earth's greatest rocket-roll band, THE PHENOMENAUTS, have teamed up with Emmy Award-winning animation writer RICH FOGEL (Justice League, Batman Beyond, Transformers: Animated) to produce INFINITE FRONTIER, an exciting new animated music video based on the hit song from their new album FOR ALL MANKIND. In this spaced-out odyssey set in the 33 1/3 Century, the intrepid Phenomenauts journey beyond the farthest reaches of the known galaxy to discover where all of the crazy TV shows, commercials and other video ephemera that we've been beaming into space over the last 50 years actually end up. Animated by talented newcomer ERICA HENDERSON (Venture Brothers/Astrobase Go), we see the heroic Phenomenauts as we've never seen them before. Additional Concept and Sound Design by ANDREW FOGEL bring this colorful space adventure to life. So join the Phenomenauts aboard their interstellar BASS SHIP for a musical journey beyond the INFINITE FRONTIER!