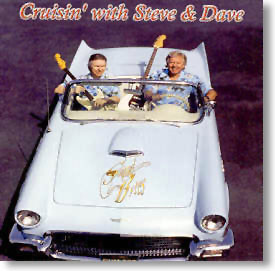 Steve and Dave began performing together as the Sound Bytes in 1994. But their respective careers in rock and roll music started long before that. Dave achieved success with a band called The Cobras playing the world famous Coconut Grove Ballroom in Santa Cruz, opening for the likes of Dobie Gray. Taking a cue from Sha Na Na, Steve developed a Surf-band concept modeled after the Beach Boys and named it PaPa Du Run Da Run. This Sound Bytes CD is a celebration of the hot rod side of the music they grew up with. Their heavy devotion to Surf and Hot Rod music, (by the Beach Boys, Jan and Dean, The Ventures etc.) makes this a revved-up winner.

2.   No Particular Place To Go