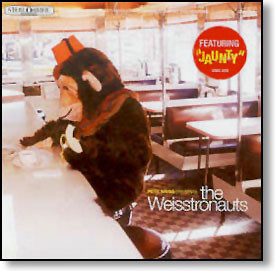 "This is the debut full-length release from The Weisstronauts...and we are proud to report that it is a Mindblower." -Babysue Zine. "Ventures on rocket fuel." - Amazon.com. "Smacks of gingham and bobbie socks..." - No Depression. If there's such a thing as a forward-thinking surf band, Boston's The Weisstronauts are it. Avoiding the purism that makes so many instrumental retro-fetishists seem redundant, The Weisstronauts combine vintage surf and Nashville chicken-pickin' with cartoon zaniness and spaghetti Western intrigue. They often recall NRBQ's offbeat musical humor as much as Link Wray's reverb-drenched Tarantino stuff.