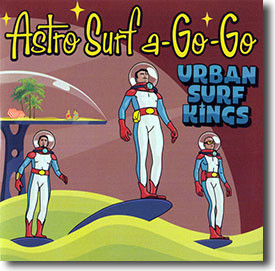 Urban Surf Kings is a 23-year-old trio playing 1960’s style surf music for the 21st Century. They are officially the longest running surf band in Canada! "Astro Surf a-​Go​-​Go" is the bands' 15th release to date with their previous CDs and 45s having charted on campus/community radio across Canada and the US; and a fan base that extends around the world. “One of the best Surf Instrumental bands on the planet” -Raucous Records, UK. Being one of Urban Surf Kings best CDs to date, fans of rockin' surf are sure to enjoy this disc.

URBAN SURF KINGS -- "QUICK DRAW NORMAN" (04:21)
I filmed this @ The SURFER JOE SUMMER FESTIVAL 2015 in Livorno, Italy. This performance took place on 'The Main Stage' outdoors on the grounds behind The Surfer Joe Diner. The date was June 20, 2015.