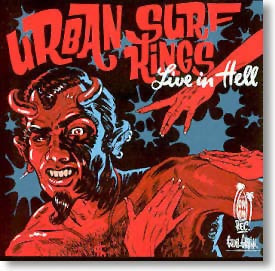 The Urban Surf Kings play Surf, Surf 'n Surf and claim to breath Surf. Asked if they wanted to live in California, their answer was: "I don't know...can you ski there?" "This is a great performance by a great band." -Reverb Central. USK features Rev Hank Mumps on guitar, Crash Flagg on bass, and Inky on drums. This 15 year old band combines the surf sounds of the 60's with Atomic Age sci-fi, B-movie Horror, Mancini Mania, and plenty of espresso. Urban Surf Kings were nominated for a Genie Award (best Canadian Soundtrack, 1999, "Canadian Oscars"), and won the soundtrack award at the Atlantic Film Festival (1999) for their work on the film "Beefcake".

15. Radarmen From The Moon