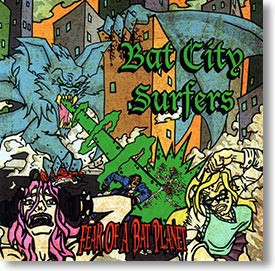 Bat City Surfers come from a world where man-kind evolved from bats and, after joining forces to create the ultimate surf-punk experience, they accidentally transported themselves into this dimension during a recording experiment gone horribly wrong! Uhhh, actually they got a whole lot just right! Bat City Surfers take on macabre personas with their instrumental horror surf (they wanted to incorporate the horror and the fact that Austin is known as the Bat City). The music on “Fear of A Bat Planet” is akin to surf-punk, a sub-genre that emerged in the ‘80s after surf music became popularized in the late ‘50s. There are no (lengthy) vocals to get caught up in, just good old instrumental wildness.