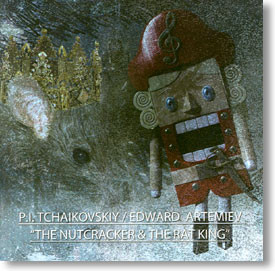 Tchaikovsky's score, which ranks among the most beloved in the classical repertoire, has been modified and enhanced by Edward Artemiev. This CD backs the movie "The Nutcracker in 3D", and is the latest curiosity in the career of the 73-year-old Russian-born director Andrei Konchalovsky ("Runaway Train", "Shy People", "Tango & Cash"), who also wrote the screenplay with Chris Solimine. It's a dystopian fantasy masquerading as a children's story, with weird things popping up. If you have any yearning to see Tchaikovsky's beloved, timeless fable, this is a very interesting point to check in. Certainly, it varies from other renditions, by maintains its value.

1.   The History Begins (Waltz of Flowers - The Vocalize)

3.   It's All Relative (Song Of Uncle Albert & The Children)

5.   Traveling on A Christmas Tree

7.   Night Flight & Invasion of The Rats

9.   Kidnapping of The Nutcracker

10. A Pebble In A Pocket (Uncle Albert's Song For Edification)

11. The Returning of The Rats

12. Everyone Come To The Show! (Toy Concerto)

14. Mary Revives The Nutcracker To Life

15. Life Is Bright Once More (Finale)