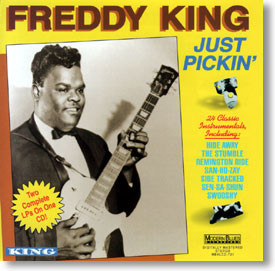 In a 1985 interview, Eric Clapton cited Freddy King's guitar playing as "the first time I heard that electric lead-guitar style, with the bent notes." Peter Green, Jeff Beck and Mick Taylor were all profoundly influenced by King's sharpened-treble tone and curt melodic hooks. Freddie King based his guitar style on Texas and Chicago influences and was one of the first bluesmen to have a multi-racial backing band. This CD is actually a combination of his two all-instrumental LPs. The playing is almost architectural at times, humorous at other times, and, especially in some of the longer instrumentals, monstrously expressive. Pure guitar genius - he is one of the greatest!