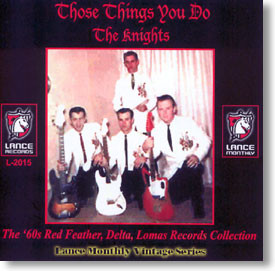 The Knights - Those Things You Do

"The Lance Monthly" Internet newsletter is sponsoring a special vintage series of CD albums, which will include the eventual two-album releases of all the '60s Lance Records' 45-vinyl songs. "Those Things You Do" is the first of these, which contains all of the '60s releases by The Knights. The Knights (a.k.a. King Richard and the Knights) had its beginnings in 1961 in Albuquerque, New Mexico (U.S.A.), during a time when instrumental rock ruled the world with The Ventures and The Fireballs leading the way. But when the Beatles invaded the U.S. in Feb. of 1964, it was a bad omen for The Knights. Dot Records reneged on a promised national release of "Precision".