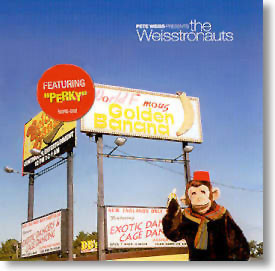 With influences ranging from spaghetti western & spy movie soundtracks to space rock, surf, twang and more, the Weisstronauts steadfastly refuse the sort of genre-pigeonholing one finds in artists, preferring instead to follow their singular muse wherever it may take them. The Weisstronauts are led by legendary Boston producer/ engineer/guitarist/TapeOp magazine contributor Pete Weiss. "This record kind of soars above the average record, most of the tracks being pure instrumental with sporadic oddball vocals echoing off in the distance somewhere. Instrumental music is in short supply, and it's nice to hear someone pull it off nicely." -Performermag.com.

The Weisstronauts: Tabasco Fiasco live in Carrboro NC 11-17-10 (03:35)
The Weisstronauts play "Tabasco Fiasco" at Jessee's Coffee & Bar, Carrboro, North Carolina on November 17, 2010. Video shot by the great Kirk Ross. Studio version of the song was recorded at Ardent Studios in Memphis, and appears on the 2011 EP "In Memphis 2." Pete Weiss & Kenny Lafler on electric guitars. Neal Spaulding on bass and Nathan Logus on drums. Written by Pete Weiss, BMI. http://www.weisstronauts.com