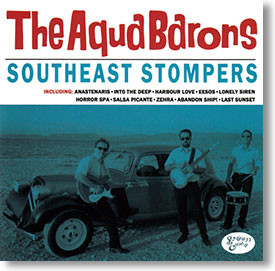 The Aqua Barons were formed in January 2010 with their love for the traditional surf sound and with guitars drenched in reverb and fuzz, coming from true vintage equipment - that's their trademark. Though drawing on trad sounds, there's some very distinct creativity in here that really stands out as their own: from the loosely floating lead guitar in "The Lonely Siren", to a killer mix of fuzz and surf guitar in "Harbour Love" and some unhinged wildness on "Abandon Ship". "Southeast Stompers" is a CD stamped with The Aqua Barons brand.