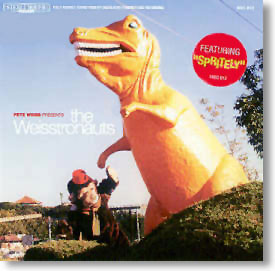 To get this genuine old feeling of the past, we once had to pull out our old 45s...but that was before we discovered The Weisstronauts. Led by Pete Weiss, this band plays straight from the heart...and their main intent is to satisfy simply and completely. And, on "Featuring "Spritely"...they do just that. This album comes with fifteen jaunty little numbers that will appeal to the young and old...fans of traditional rock...fans of alternative rock...fans of country...hell, just about anyone oughta enjoy this disc. Weiss is a killer guitarist with a true sense of style...and the rest of the band plays with sincere energy that you can't help but be drawn into the magic.